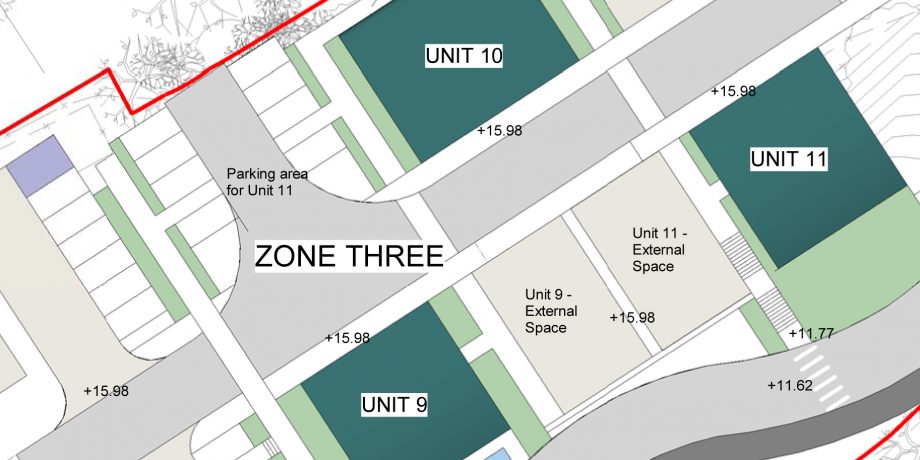 Atelier 3 Ltd was appointed by Imerys Minerals Ltd early in 2016 to prepare development options with a view to preparing a outline planning application for a new business park development at Hensbarrow Dry (a former clay dry). The proposal is to create 11 units containing B1/B2 business and commercial uses.

The site is fairly large and steeply sloping in places as a result of its previous use and therefore the concept has been to divide it into three zones which would create clusters of business units which would share access, parking and amenities.

The scale of the buildings are designed to have sufficient presence for commercial and business units.  This is to be determined by a reserved matters application typically with 6m min eaves heights.  The scale of the existing clay dry sheds has been considered.  There is a variety of large scale industrial units in the vicinity of the site and it is considered that this development will act to complement the existing context.

The general idea is for a simple landscaping scheme which would serve to connect different areas of the site and also provide pedestrian access up to each of the units. Strips of planting would also be used to divide up the different units and parking areas as well as larger areas of landscaping which would serve as amenity space for each of the units.

In Zone One which is steeply sloping, a series of terraces have been proposed to create usable spaces between the upper and lower units linking in with the landscape behind and bringing it down to road level. Zone Two has a large area to the rear of the units which can be accessed via steps from the car parking area as well as directly through the buildings. Zone Three is arranged so that the units sit either side of the central access/courtyard.  This area is focussed predominantly on the views so have less landscaped areas between the units, although there are some areas in front of the units alongside the road that slopes up to this part of the site.

Throughout the whole site consideration has been given to attenuation, and therefore some pools have been designed into the layouts to collect water.

Plans for New Business Park Featured in the News

We were very pleased to see that our proposals for a New Business Park in Par have been featured in the Cornish Guardian.